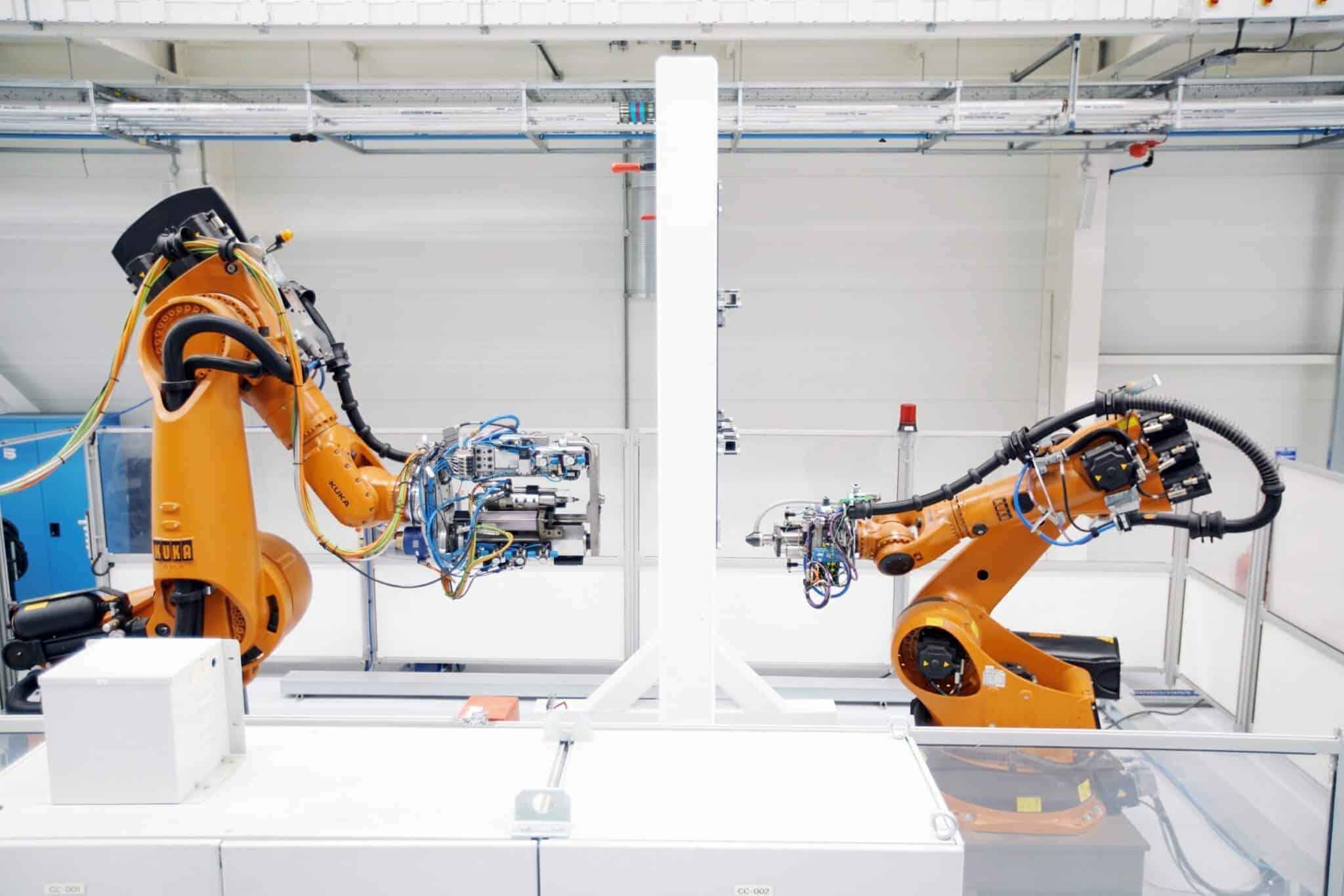 The aeronautics industry is seeing increased automation, with robots achieving the accuracy and flexibility required for complex component creation and assembly.

Robots are now drilling, milling, welding and handling materials. They are incorporating features such as 3D vision and automatic tool change and are used for automated fiber placement to create large airplane body components. US-based RobotWorx supplies and integrates robots from the likes of FANUC, Motoman, KUKA and ABB.

From FANUC, for example, it provides models such as the M-710iC that can remove aerospace equipment coatings. FANUC’s learning vibrations control (LVC) allows the robot to learn its vibration characteristics for higher accelerations and speeds. Derek Jones, sales engineer, says:

There are also robots with vision applications coming to the market in areas such as bin picking. Previously a person would have to set out an array of parts for a robot to pick up: now, you can put the parts in a bin and use a 3D vision system to allow the robot to grab and then assemble them.

Companies such as ATI and Applied Robotics are selling robots that have automatic tool change. These quick-change devices are for processes requiring frequent connection and disconnection of tooling.

They work with small or heavy payloads; pass IO, pneumatic and water, and are designed to function reliably for millions of cycles while maintaining extremely high repeatability.

A lot of research is being done by robot manufacturers because their customers, including those in aerospace, are driving them to find solutions.

Much of the automation takes place downstream, says Prasad Potluri, Professor of Robotics and Textile Composites at the U.K.’s University of Manchester.

It is where they make components and carry out sub-assemblies that we are seeing it, especially where new composite materials are being used.

Wing covers and fuselages, for example, can be made up of a series of layers of tape, where carbon fibres are arranged side by side and impregnated with resin.

The robots stick carbon fiber tape on to a surface until they get the right orientation and thickness: the part is then ‘cooked’ in an autoclave.

The Boeing 787 Dreamliner, for example, has an airframe comprising nearly half carbon fiber reinforced plastic and other composites. Prof Potluri expects to see more automation upstream when volumes increase.

The main reason there is far less automation than in the automotive industry is because there are not the same high volumes. Having said that, there is global growth in aviation and we may therefore see higher volumes in the future.

THE CHALLENGE OF LEGACY

UK-based Mussett Engineering has been a sub-contractor to the aerospace industry for 35 years, working on programs with major OEMs, machining a range of high precision components for military and commercial aircrafts.

Managing Director Gordon Mussett is also now seeing more robotics in areas of high volume, such as aircraft seats. But, he admits, it is largely in the production of new planes as legacy programs were not designed for robots.

It is very difficult to change the manufacturing processes for some of the components in older planes: automation is cheaper with modern machines for modern parts.

But suppliers are automating systems to offer JIT delivery times and speed up production. BÖHLER produces steel for the aeronautics industry and has a purpose-built KASTO system, which has improved turn-around times by automating racking and storage capabilities.

Our customers are highly innovative specialists, they demand high-performance materials, but also need intelligent solutions that expand the limits of what is possible.

Some manufacturers are looking to use cobots rather than robots in the future. By the end of this year, BAE hopes to have a cobotic workstation operational at its site in Lancashire, UK.

Fitted with sensors to enable cobots to safely interact with employees during complex assembly tasks, the workstation will be employed in building high-tech systems for advanced combat aircrafts.

Ben Morgan, head of the integrated manufacturing group at the University of Sheffield’s Advanced Manufacturing Centre, which has worked on the cobotic station, says the speed of the implementation of automation in aeronautics is due to the complexity and accuracy required.

In the automotive industry we are largely happy with accuracy of 1 mm – in aerospace we need it to be 100 microns or less, so the peripheral systems required become much more expensive.

I think it is definitely moving in the right direction. There’s a lot of work being done to embed cognitive functions in robotics and drive artificial intelligence through machine learning. Once we start to crack that properly I think it will open robotics up to a much wider market, particularly among SMEs who are doing batch production. If the robot understands what needs to be done and doesn’t need programming every time, that will open the market up – and aeronautics will benefit.