Home » The Ground is Going Electric and Autonomous

The Ground is Going Electric and Autonomous 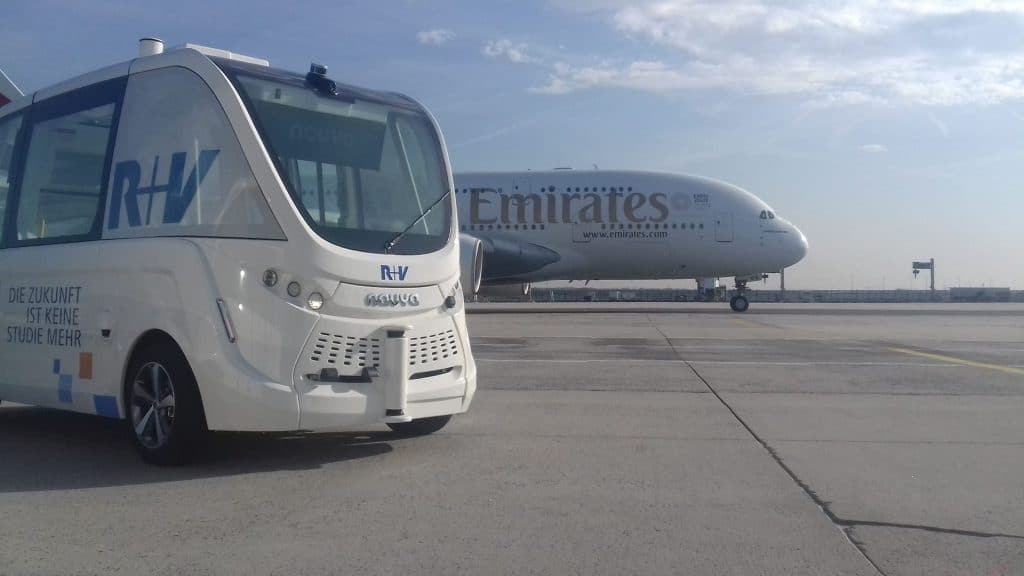 Driverless electric vehicles could prove crucial to logistics on the ground for airports in the future. A project is currently on trial at the Paris Charles de Gaulle Airport.

The initiative involves two shuttle buses running a 700-meter-long route between the local metro station and the headquarters and the Environmental and Sustainable Development Resource Centre offices of airport operator Groupe ADP in the Roissypôle business district that adjoins the airport.

Test on the Ground

Each bus has a capacity of eleven seats and four standing passengers and reaching a speed of 25 km per hour. The free service runs from 7:30 a.m. to 8:00 p.m. with passengers summoning the buses using a smartphone scanning code.

According to ADP the project, which started in March and runs until July, is intended to prove the feasibility of using driverless vehicles on public roadways with high traffic density including manoeuvres such as merging with and passing other vehicles. A further critical factor in this case is that the area involved also has a lot of pedestrians. The company says that these issues have been tackled by the use of an “intelligent road infrastructure system” in which the vehicles and traffic signals communicate with each other to ensure operational safety. This system is, it states, a “world first”.

For ADP, the project is seen as the first step in a longer term strategy to use such vehicles to enhance the transport infrastructures that support the airports it manages.

Two other French companies are also involved in the project – system operator Keolis, which is 70% owned by railway operator SNCF, and vehicle supplier NAVYA, which was formed in 2014.

Marketing director for NAVYA Nicolas de Crémiers says that the Roissypôle project uses the company’s AUTONOM SHUTTLE vehicles that were first introduced to the market in October 2015. Four of the vehicles are now in commercial use at airports across the world.

The vehicles exploit a number of highly sophisticated technologies to ensure that they effectively combine autonomy and safety.

With neither a steering wheel nor pedals AUTONOM SHUTTLES use effective guidance and detection systems that combine various types of advanced technology.

These include data from Lidar pulsed laser light sensors, cameras, real-time kinematics powered by GPS satellite data, inertial measurement units and motion sensing which are merged together and interpreted by deep learning programs. These are necessary because the route followed by the vehicles is not segregated but, as he also confirms, is instead “a 3D mapped open road with traffic lights”.

Vehicles of this type could prove crucial to the ground-level logistics for airports in the future:

Airports welcome millions of travellers every day so these places of transit have to manage a variety of flows, both to facilitate work for airport staff and to provide the best guidance possible to passengers in a restricted space. Autonomous, electric and driverless mobility solutions could be an answer to those challenges as they can provide increased service availability and route frequency, improved passenger comfort and enhanced safety.