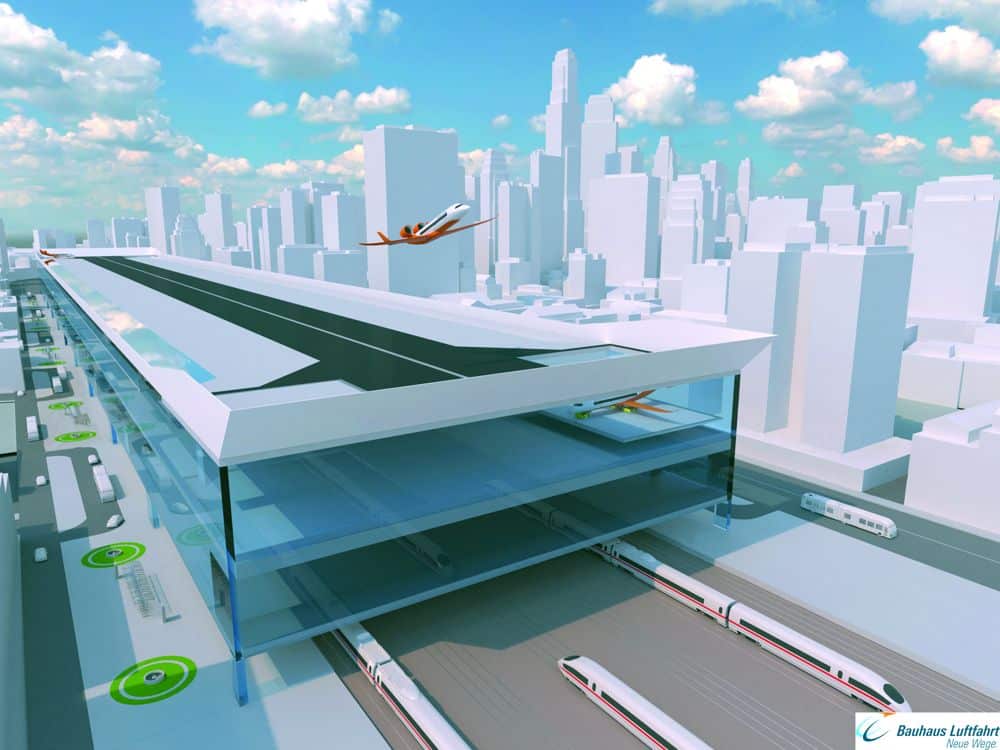 Inner city, multi-level airports above railway lines – by 2040 a group of experts hopes its aviation ideas will be on track.

With air traffic expected to double in Europe over the next 15 to 20 years – and to treble or even quadruple in Asia – we need concepts that meet global demand. They need to offer high frequency travel, which means either making existing airports bigger, and creating very time-efficient connections, or moving airports to where people live – right into the cities. 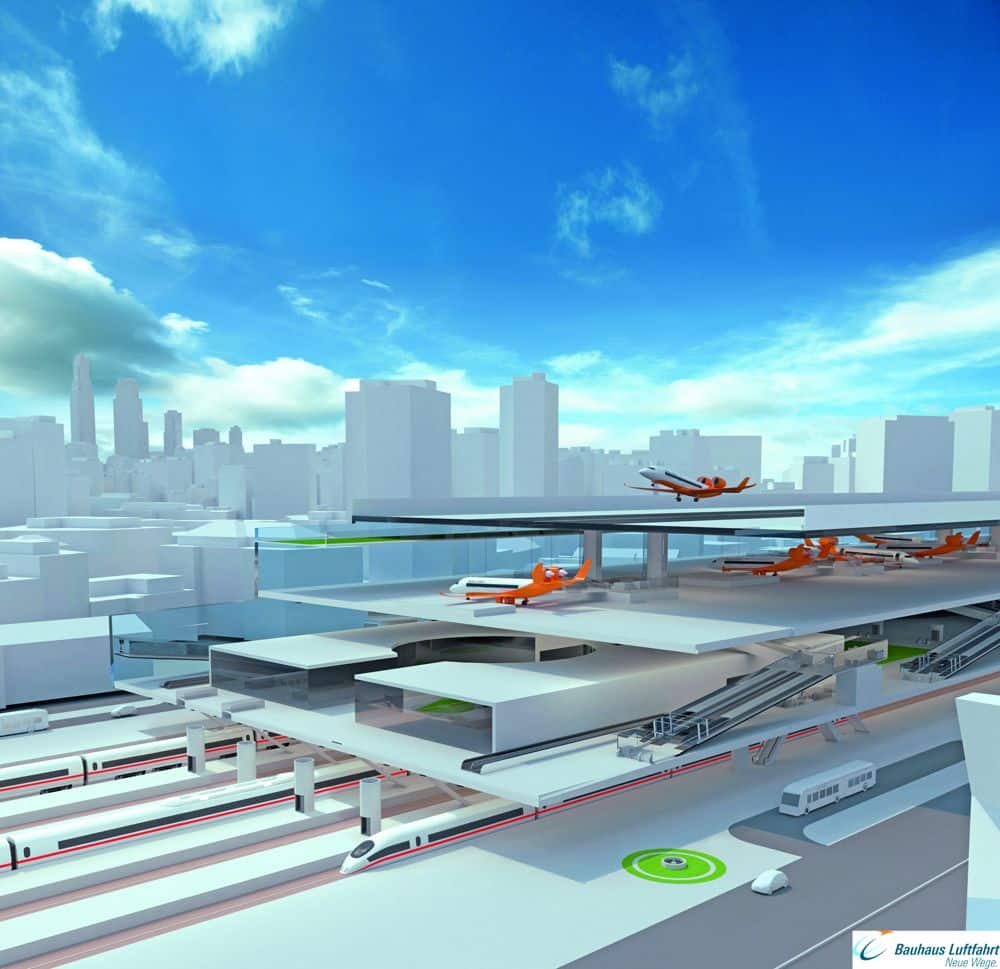 Bauhaus Luftfahrt was founded in 2005 to bring about an interdisciplinary, cross-fertilization of ideas. As such, students from Glasgow School of Art were invited to join scientists on the project to help solve air transport challenges by 2040.

Increasing urbanization and the European Commission Flightpath 2050 challenge (which seeks a four-hour, door-to-door journey time for 90% of travellers on the continent) were drivers to finding a solution.

Dr. Plötner explains that one of the students came up with the idea of CentAirStation.

We already have train tracks that are used to transport people in cities so why not put airports on top of them?

The four-storey city airports would be 640 m long and 90 m wide. At ground level, trains would deliver passengers, who would take escalators and elevators up to the floors above.

Passport and baggage checks might also be conducted here before passengers moved up to the next storey to board the aircraft. An elevator would lift the plane up to a top-floor runway, where it would take off immediately.

There would be a requirement for departing passengers to be able to move from train to plane within 15 minutes for take-off. Then upon arrival at their destination, they would go from plane to train within just 10 minutes.

Developing a short take-off and landing plane suitable for the CentAirStation as well as conventional airports was a complex process, says Dr. Plötner.

The wingspan had to be determined by the maximum width of the building itself. If you want to take off and land in cities then you also have to consider noise levels and emissions, as well as energy efficiency and safety.

The result is the 60-seat CityBird, which has a wingspan of 28 m, a U-shaped tail and aft-mounted engines. There are still some hurdles to overcome, Dr. Plötner admits. With the current technology available there would still be some noise.

Rising to the Challenge 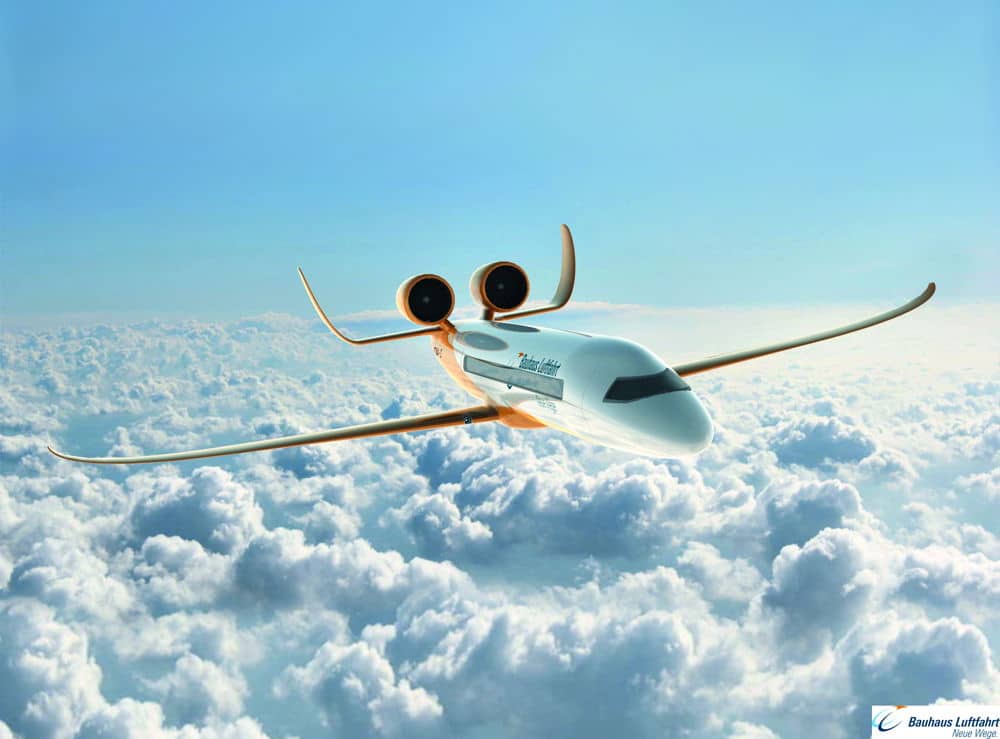 Dr. Plötner believes CentAirStation and CityBird could be a reality by 2040 if challenges can be overcome.

Arrival and departure procedures would need to be much more dynamic than they are now but that would be one of the benefits of building new airports rather than expanding existing ones. There would need to be economic benefits – but an airport is basically just a shopping mall with planes and the CentAirStation is no different.

Creating CentAirStations in suitable, existing city centre locations could increase capacity of the air transport system by an average of 185% in the U.S., 480% in Europe and 341% in Asia, according to the team.

Dr. Plötner predicts the first CentAirStations will be built in China

They are already building new airports there because of the growing demand for air travel.

The next step: convincing the policymakers, stakeholders and the community of the potential for further change.